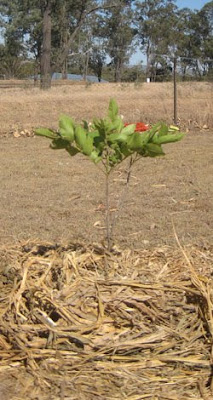 Here are the photos of our uber green pecan trees as promised! Ok they aren't quite as green as they were two weeks ago as we are in a real dry, dusty stretch (evidenced by the brown expanse of grass!) which has knocked around all the trees but you can still get the explosion of green growth that occurs with these guys once spring rolls around.
Pecan trees are North America natives and have been commercially grown there since the 1850s. They are part of the walnut family and their botanical name is Carya Illinoensis. They are apparently very long-lived and can grow into pretty formidable trees. Some still-productive trees are well over 100 years of age!
As Pecan varieties generally do not self-pollinate we have planted two types. All of them produce male flowers (called catkins) and female flowers (called pistelets) on separate branches We are told that the male flowers don't generally shed pollen at the same time as the female flowers on the same tree are ready to be fertilised. Sounds like an evolutionary hurdle but hey - lucky us humans are here to lend a helping hand! 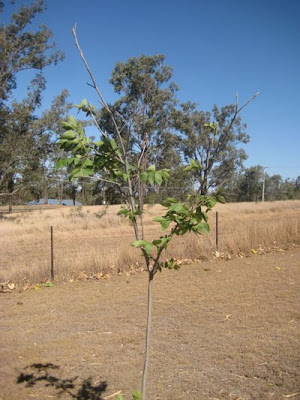 Jayson
at 9:36 PM
Email ThisBlogThis!Share to TwitterShare to FacebookShare to Pinterest