We have gotten into the vege patch to clean out the overwhelming pumpkin vines that had moved from the main large square patch over pretty much the entire rest of the garden. We had spotted a couple of pumpkins in there prior to the cleanup but three trailer loads of vines later the true haul was revealed. 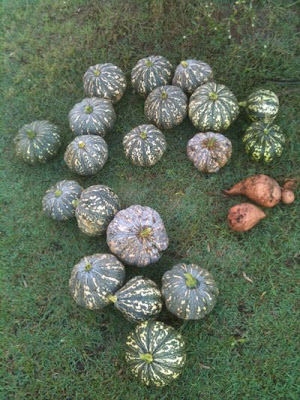 We've never had any trouble growing pumpkins around here so while it was not at all surprising it was a welcome harvest. Those with good eyes will spot a couple of watermelons in there as well that were hiding down the far corner. The sweet potatoes you can see were from the same patch as that monster one a month ago.
Jayson
at 2:01 PM
Email ThisBlogThis!Share to TwitterShare to FacebookShare to Pinterest